The Rock Wrens of Ashland

On May 3, 2017, we received a call from Eric & Laurel Setterberg in Ashland, Oregon who had found a nest of orphaned Rock Wrens that needed help.  Now this was a rather unique call because a) these babies were truly orphaned, b) they were Rock Wrens, & c) it was evening & he was 60 miles away from us.  All that being said this call ended up being even more unusual.

Let me back up a bit, Rock Wrens are uncommon to find in the Ashland area.  The presence of a mating pair with 5 little ones was quite the talk of the birding community in Ashland.  As a result, this family had a LOT of folks regularly monitoring the nesting site.  This turned out to be very important for the babies.  The parents had uncharacteristically built their nest in an open pipe of a gate at the entrance to one of the most popular county parks in the Ashland area.  Unfortunately, the parents took to foraging for insects on the road by their nest site & both were killed by a car(s) driving past.  With folks regularly monitoring the nest site, the dead parents were discovered quickly & the orphans taken in.

Next came the question of WHO to call for help.  Badger Run Wildlife Rehab is about 60 miles away from Ashland, but we often do rescues in that area so word of mouth led Eric to us.  Since the babies required immediate attention & feeding, we found a former rehab volunteer in Ashland who was able to keep them appropriately fed & warm for us overnight until our volunteer, Shannon Rio & her granddaughter, Piper, could transport them to us the next morning.  Unfortunately, one of the orphans did not survive that first night, but the remaining 4 flourished under the care of Badger Run’s founder & director, Liz Burton.

Liz took the 4 little wrens to work with her every day so that she could feed them every 15-20 minutes (sunrise to sunset).  Within a week these babies were fledging & quite the frisky group.  They got “flight training” by zipping around Liz’s bathroom & ate their fill of crickets, fruit flies, & wax worms.  Finally, after 2 ½ weeks in Badger Run’s care, the foursome was tested in a special flight enclosure with live insects to make sure they could “hunt”.  They passed with flying colors & were ready to go.

So on May 22, the Rock Wrens returned the sixty miles to Ashland with Shannon Rio once again chauffeuring them.  The next morning Shannon released them back to their home range, but to a much safer spot away from any roads.  She reported that they all took off enthusiastically onto the cliffs (after all, they ARE Rock Wrens).  They were also supplied with an abundance of crickets at release & will be checked on regularly. These little wrens are quite the celebrities among the birders in Ashland.  Not only are they uncommon to find in that area, but before the parents were killed they had displayed many interesting behaviors including some unusual additions to the standard Rock Wren diet. When they were released they were accompanied by two ornithologists, Barbara Massey & Pepper Trail, & photographer, Jackie Markin.  We look forward to hearing more in the future from this group about their observations.  You can also read about the wrens in Laurel Setterberg’s blog at http://ravenandchickadee.com/2017/05/birds-in-the-hood-and-a-rock-wren-rescue/ 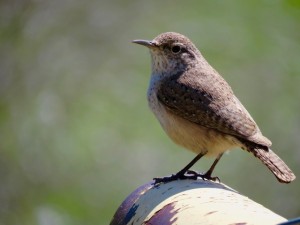 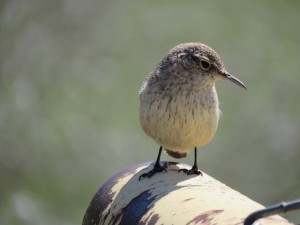 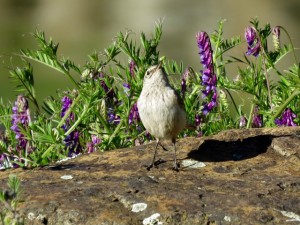 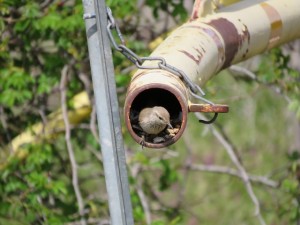 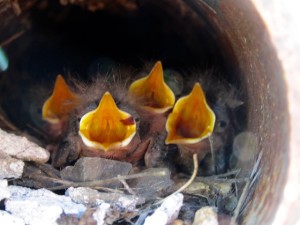 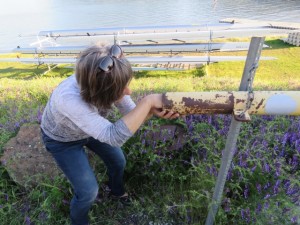 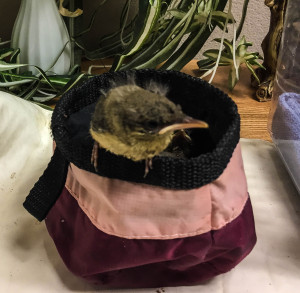 Photos of the release from Jackie Markin 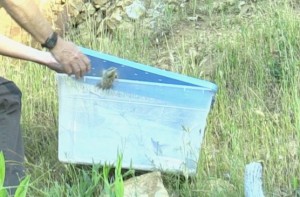 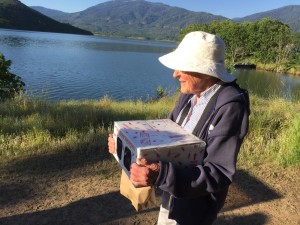 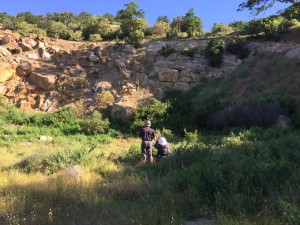