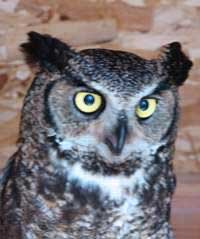 “Ewok” is a Great Horned Owl who was just a fledgling in May 2006, when he landed on a faulty power pole in a rainstorm and was electrocuted. The only way to save his life was to amputate a portion of his left wing, rendering him unable to fly. He is an exceptional Ambassador, staying calm in any situation. It was too late for Ewok, but some good did come of his accident. When we told Pacific Power about the pole they fixed it immediately, and no more birds have been injured at that site!