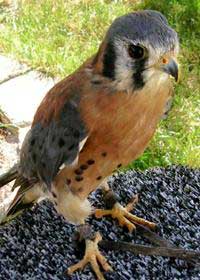 Once known as Sparrow Hawks, we couldn’t resist naming our one-eyed Kestrel, “Captain Jack Sparrow…Hawk”. While learning how to fly, he apparently misjudged and crashed headfirst into something hard. He suffered a severe concussion and badly damaged his left eye. Though recovered from the skull injuries, he lost that eye. As Kestrels hunt “on the wing”, they need excellent depth perception to accurately zoom in on their prey. If released, a one-eyed falcon would probably starve.